Published on June 3, 2018 by Revolution Television

Dedicated to the “Protectors” who secure the Hawaiian culture that considers Mauna Kea sacred, this documentary was produced by award-winning filmmaker, Dr. Leonard G. Horowitz. It blends research, analysis and commentary promoting world peace by vetting Deep State corruption in America’s most strategic defense outpost—the land, sea and space of Big Island Hawaii. This opposition to volcanic devastation and spiritual desecration is centered around a secreted hydrogen fuel cell and fracking operation diverting and poisoning water on one of the holiest places on earth, according to natives, protestors, scientists, and allied international “Protectors” now marveling over “Pele’s” scorched-earth retaliation.

Horowitz is a 66-year old natural health industry pioneer and leading Big Pharma critic. He was among the first filmmakers worldwide to broadcast “Fair Usage Documentaries” censored by Google/YouTube to conceal Deep State interests and their illegal protection racket. Here, he, Dr. Melissa Yee—a Chinese-Hawaiian activist directing the Seeds of Truth public interest group, and journalist Sherri Kane, reveals common financiers and media partners implicated in double-dealing high-tech “dual use” military projects desecrating the sacred “Mauna” of Hawaii according to irrefutable evidence shown in the film. Plans to build the Thirty Meter Telescope (TMT) on the highest mountain on earth here, along with concealed U.S. Navy and Air Force involvements therein, are determined commercially linked to stockholders in intelligence operations, security agencies, and defense companies administering the false nuclear ballistic missile alert earlier this year. The same parties, documents reveal, committed multiple instances of consumer fraud and scientific mischief. Concerned experts know fracking and land blasting suffered by the Big Island triggered the volcanic eruptions and devastation blamed on “Pele,” whose 2018 inferno destroyed dozens of homes, dispossessed nearly two thousand people, continues to issue lava flows, and is predicted (at the time of this writing) to explode even more according to the military-media’s propaganda.

SPACEGATE: The Militarization of Sacred Mauna Kea was produced for public television by doctors Horowitz and Yee, who previously directed a number of Olelo Community Media productions as Hawaii’s most accomplished activists. Yee was instrumental in helping to ban the open air testing of genetically-engineered plants by Monsanto before corrupted officials reversed the Big Island’s mandate.

Both films feature Sherri Kane, a Fox News defector from LA whose films and publications, like Horowitz’s, have been censored by Google/YouTube and Facebook. Internet “trolls” and “spam bots” regularly smear the couple’s reputation, prompting them to launch their own media outlets including RevolutionTelevision.net, 528Records.com, 528Radio.com, WarOnWeThePeople.com, JudicialCorruptionNews.com and MedicalVeritas.org. Their growing list of supporters include “528 Revolutionaries,” HealthyWorldStore.com, CureShoppe.com, and thousands of Internet fans reposting their videos and articles. 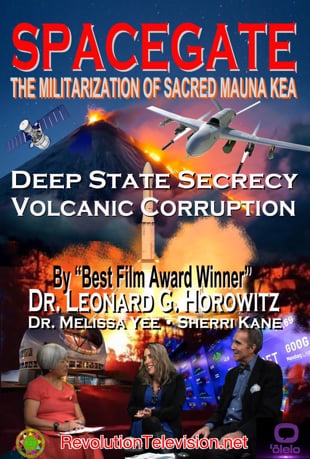