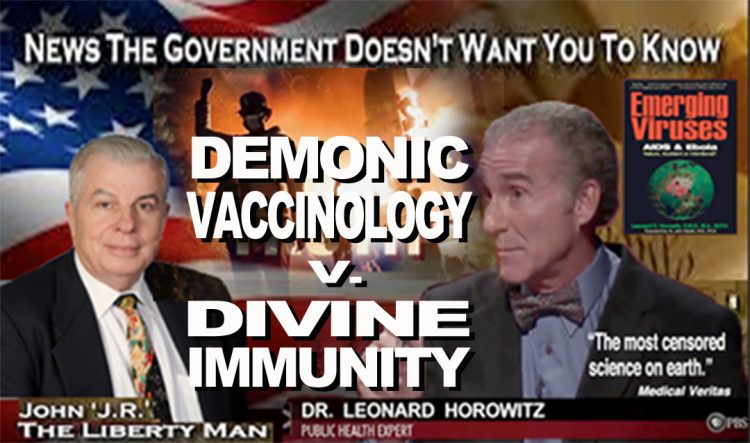 In this segment of the John Moore Show from Republic Broadcasting Network, Dr. Leonard Horowitz and callers advance a most controversial thesis: That “Divine Immunity” is endangered, along with civilization’s survival, by “Demonic Vaccinology.”

Discussion topics include: the wreckage being caused by “opening Pandora’s box” spreading deadly lab viruses that, like the Pfizer and Moderna mRNA vaccines, corrupt human immunity and viral genetics. Mutations in the human and viral species from these “genetic therapies” is the “epitome of insanity” and recklessness, Dr Horowitz explains. The genocide unfolding under the guise of “public health” and developing “herd immunity” is unconscionable!

Yet, caller Deborah from Arizona, relays mainstream media propaganda that says, “don’t concern yourself with these risks.”

“John from Tennessee” moves the show into the most “enlightening” direction. He relays research showing that the COVID vaccine mimics breast cancer induction, and that this is being promoted as “normal.” The entire scheme appears to parallel the vision in Daniel, Chapter 2, foreshadowing the “transhumanism” movement that the disease-industrialists are advancing. Complete control over humanity is their objective. Psychopathic industrialists such as Bill Gates, Elon Musk, Klaus Schwab, and others are investing in biotechnologies to usurp the power of the Holy Spirit over the “body temple.” The entire mRNA vaccination system, that includes nano-chip laced hydrogel envelopes that deliver the “payload,” is unGodly.

“Glenn in Pennsylvania” relays updates on vaccine-related viral mutations. The mRNA operating system is being “tweeked” through multiple vaccines administered every year causing more and more mutations of the human genome and various viral species. These mutations cause dysfunctions in human immune responses upon which we depend for health and longevity.

“Empty chairs” at vaccination outposts reflect the growing anti-vaccination awareness and negative public sentiment towards drug companies and the fraud they are committing devastating people, families, communities and nations. Merck and AstraZenica are classic examples forced to “drop out” of the mRNA vaccine arena due to public distrust. They are instead turning to ‘re-configured’ single-shot COVID vaccines. Merck has partnered with Johnson & Johnson for this purpose. They are using aborted fetal cells and viral particles extracted from monkey feces for this single-dose poison.

“Pat in Texas,” a veteran health science investigator, raises the research by Gao, et. al., that applies “photo-dynamic therapies” to cure cancer. Dr. Horowitz responds with his research and analysis.

Overall, this is a very unique and informative hour program that you will want to share with your friends.